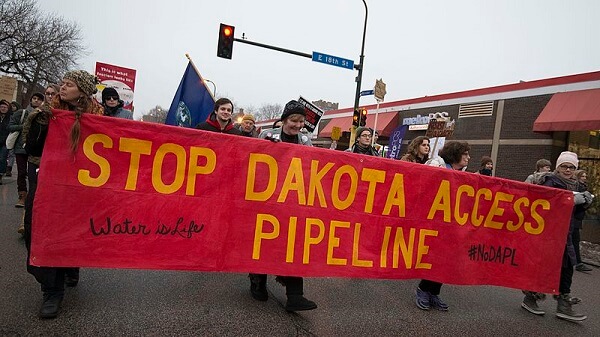 Tensions over the Dakota Access Pipeline are still brewing

The Dakota Access Pipeline development attracted several thousand environmentally-conscious activists to protest against the project. The tensions are still strong as the Energy Transfer Group, that is behind the pipeline project, filed a lawsuit against Greenpeace and affiliated nonprofits on Tuesday.

Energy Transfer Group filed a racketeering lawsuit in the federal court over the claims that Greenpeace and other environmental groups involved in the protests have made damages of billions of dollars due to their “criminal activity”. Moreover, the group accuses Greenpeace of having spread false information about the project. EarthFirst! and BankTrack

EarthFirst! and BankTrack are the two other groups that have joined Greenpeace in protest of the pipeline. Energy Transfer Group believes they are “rogue eco-terrorist groups”. Moreover, they have engaged in campaigns of misinformation about the impact of the project on the environment and the sites of the Standing Rock Sioux tribe. Due to their racketeering and efforts at defamation, the costs of the project have increased by at least $300 million. The developer wants the federal court to establish the full extent of the damage.

Lawsuit “Meritless” according to Greenpeace

The law firm that has Marc Kasowitz, President Trump’s attorney, as managing partner represents the Dakota Access Pipeline Developer. Tom Wetterer, General Counsel at Greenpeace USA, said that it is the second consecutive year that the Kasowitz law firm filed a “meritless” law suit against Greenpeace. Wetterer has harsh words about the suit:

It is yet another classic ‘Strategic Lawsuit Against Public Participation’ (SLAPP), not designed to seek justice but to silence free speech through expensive, time-consuming litigation. This has now become a pattern of harassment by corporate bullies, with Trump’s attorneys leading the way.

The controversy regarding this project is that it would disturb the sacred sites of the Standing Rock Sioux tribe in North Dakota and threaten its water sources. The tribe managed to halt the construction of the pipeline during the last months of the Obama administration. However, President Trump quickly reversed the policy.