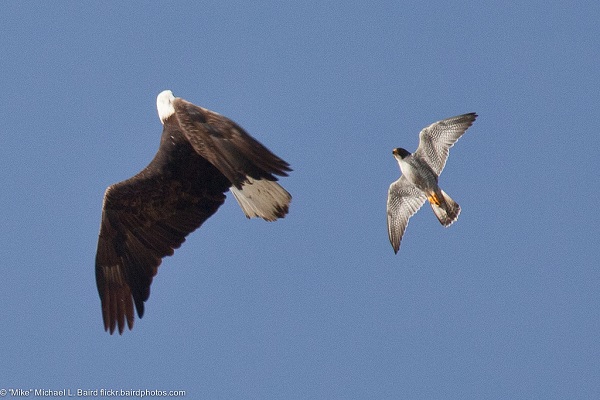 Peregrine falcons target their prey like guided missiles, according to the study.

A recent study published in the journal, Proceedings of the National Academy of Sciences, suggests that the movement of a Peregrine falcon may hold the key to taking out rogue drones. According to the research, Peregrine falcons can modify their trajectory in accordance with their prey, without any discernable pattern. The birds use their eyes to line up parallel to a moving target akin to a guided missile.

Researchers from Oxford University attached GPS units and cameras to eight Peregrine falcons as well as on a number of fake prey decoys.

„We spent four field seasons flying falcons in the Welsh hills, working with an experienced falconer and a qualified drone pilot,” said Caroline Brighton from Oxford University’s Department of Zoology and co-author of the study.

The flight patterns and falcon attacks were captured on video, and the results were eye-opening.  Researchers used data from 23 attacks on stationary targets and 22 attacks on moving targets to accurately pinpoint how the Peregrine falcons adjusted their dives. Instead of trying to guess where their prey might be going and setting and intercept course, Peregrine falcons maintain a line of sight while making adjustments depending on the prey’s movement.

According to the study, the bird’s trajectory follows a law known as proportional navigation, which is most commonly used in visually guided missiles. Researchers believe that such movements can be implemented in small drones that could take out other drones from protected airspace.

The report said that the method does not require any information on a target’s speed or distance but, instead, it relies on the rotation of the attacker’s line of sight to the target. The US Air Force Research Laboratory financed the study.