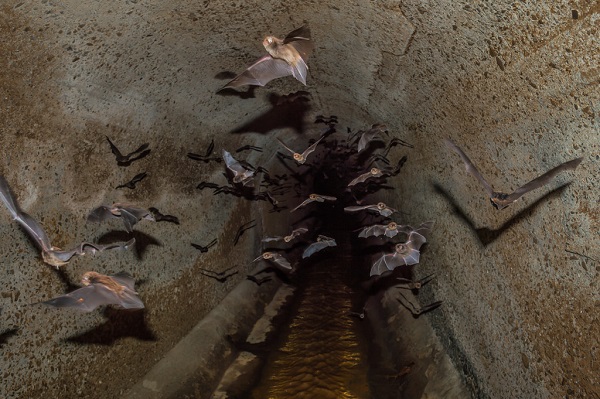 Vampire bats can drink blood thanks to their unique gut biome enhanced immunity.

We all know what vampire bats love to eat, but what we didn’t know until now is how they are able to stomach their food source. The act of drinking blood, otherwise known as hematophagy, is not a common trait among mammals and rightfully so. Blood is extremely low in carbohydrates and vitamins, it can flood the kidneys, and most of all, it can contain a series of blood-borne diseases that our stomachs can process. So how are these flying creatures able to survive by drinking this seemingly poisonous nectar? Scientists believe that it has to do with their gut bacteria and genes.

On Monday, scientists announced that they were successful in sequencing for the first time the complete genome of a vampire bat. They found numerous genetic traits that allow the flying mammal to survive the diseases and nutritional disadvantages that are associated with drinking blood.

Common vampire bats inhabit parts of Mexico, Central America, and South America. They feed on the blood of livestock such as cattle and horses.

“We decided to study this species because it has an ‘extreme diet’, in the sense that it requires many adaptations in the organism to live on that,” notes Lisandra Zepeda, lead author of the study, and a doctoral student at the University of Copenhagen.

Dr. Zepeda and her team identified several genome features that strengthen the vampire bat’s immunity and viral defense to cope with blood-borne pathogens. In addition to their enhanced immunity, researchers also found a unique combination of gut microbes, which most other mammals wouldn’t be able to process. While analyzing the dropping of these animals, they found 280 bacterial species that are known to cause disease in other mammals.

The study was published in the journal, Nature Ecology & Evolution.