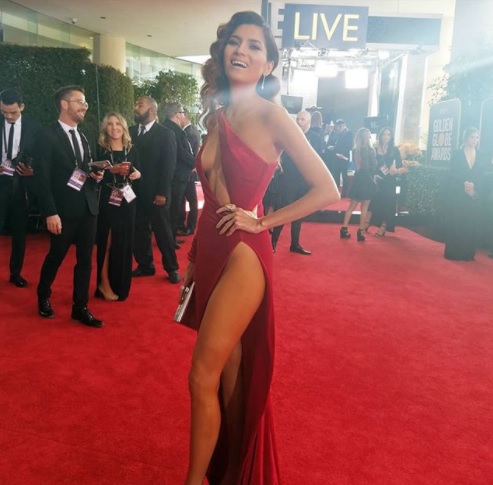 On Sunday evening, women attending the 2018 Golden Globes decided to wear all-black to raise awareness about the culture of sexual harassment in Hollywood. Latin actress Blanca Blanco, however, decided to break the dress code and wear a crimson red outfit.

Her decision was met with huge criticism.

At the event, Eva Longoria said women should be aware that this year’s Golden Globes is a “moment of solidarity, not fashion moment.” She explained that for years women have put on quite a show with their gowns and beautiful faces and figures. However, this year things have changed.

Critics roasted Blanco for opting for red when her peers were wearing all-black. Twitter exploded as well, with users not being able to comprehend what was on the Latino beauty’s mind when she picked red.

One Twitter user noted that during a movement that seeks to raise awareness about the sexualization and abuse of women, the actress chose an outfit that seems an “awkward choice”.

Blanco: Shaming Does Not Fix the Problem

Other social media users, though, defended Blanco’s fashion sense. One Twitter user noted that it is “ridiculous” to shame a woman at an anti-shaming event or accuse her of supporting sexual harassment because she failed to follow a dress code. “Guess we’re back to blaming the woman for her attire,” one user tweeted.

Blanco, 36, was disappointed with the critics’ reaction. In a recent interview, she explained that she loves red and that her fashion choice was not a statement about being against the movement.

She cheered the actresses that spoke out against abuse and took a stand with their fashion choices. She noted that real change is “long overdue,” but added that resorting to shaming does not fix the problem.

Blanco was not the only star to break the dress code at the show. Meher Tatna who leads the Hollywood Foreign Press and German actress Barbara Meier sported more colorful looks as well.
Image Source: Instagram