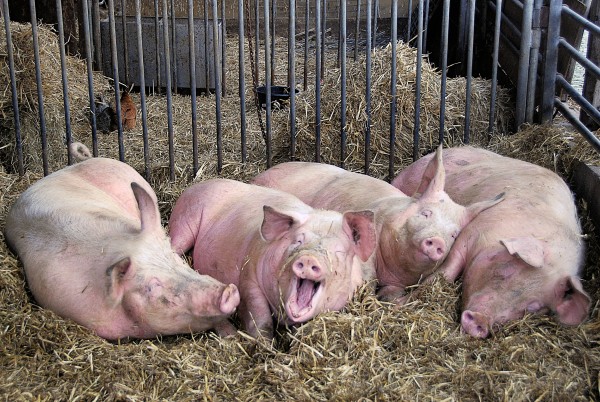 a number of swine flu cases reported in West Michigan

The Michigan Department of Health and Human Services is responding to a number of swine flu cases in West Michigan. After participating in county fairs, two children have been reported with a form of swine flu which allegedly was contracted from infected pigs.

Across the state, three people have contracted swine flu from coming into direct contact with pigs and people are now wondering what measures are being taken to avoid spreading the virus.

Recently, twenty pigs out of the 350 exhibited two weeks ago at the Cass County Fair tested positive last week for a strain of influenza H3N2 known as swine flu.

Doctors confirm that the H3N2 strain is harmless in comparison to other types of influenza, like H1N1. Dr. David Davenport, an infectious disease expert with Borgess Medical Center, stated that nine times of ten this is an almost harmless disease, and it is due to direct contact with contaminated pigs.

Swine flu is a respiratory illness caused by influenza viruses that infect the respiratory tract of pigs and result in a decreased appetite, barking cough, nasal secretions, and lethargic behavior; the virus can be easily transmitted to humans.

The 2009 swine flu outbreak (pandemic) was due to infection with the H1N1 virus and was first observed in Mexico. The incubation period for the disease is about one to four days. The disease perseveres for about three to seven days. More severe infections could persist up to 10 days. The best-known way to prevent the swine flu is vaccination. It reduces the chances of becoming infected with influenza viruses.

Officials have been carefully monitoring the fair organizers all over the state and believe that these are isolated cases that pose no threat to humanity.

People attending the county fairs are advised to avoid contact with sick people to stop spreading the disease. Moreover, they must avoid touching their mouth, eyes or nose to prevent spraying the microbes.

The limited availability of vaccines makes it harder for pigs to get vaccinated ahead of time. More than 30 percent of exhibition pigs are likely to catch the virus.

Fortunately, both people that contracted swine flu during the Muskegon County Fair have recovered.