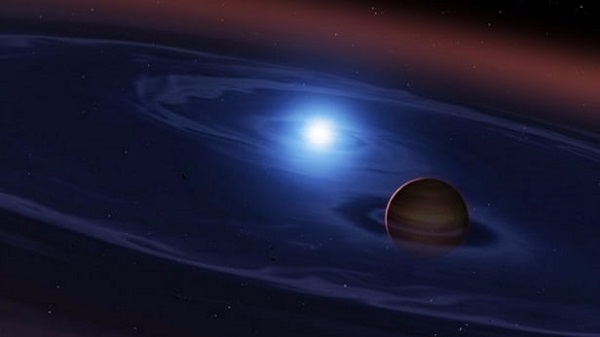 Considering the incredible expanse of the Universe it isn’t that hard to believe that it may contain even particular system described in works of science-fiction such as the Star Wars universe’s Tatooine planet which orbits around two stars.

Scientists have recently found evidence of a rocky planet formation formed from shattered asteroids which are currently orbiting a pair of stars. This suggests that among the many possibilities of an infinite Universe, even scenarios described in fiction may very well be possible.

However, the most important aspect of the discovery is that it suggests that rocky planet formations may very well be capable of surviving the death of their own stars, according to the study’s researchers. Despite the fact that our planet only orbits one star, there many other star system home to two or more stars, orbiting each other. In fact, scientists have even discovered system with up to seven stars.

Planets like Star Wars’ Tatooine, which orbit two stars, are known as circumbinary planets. The first discovery of such a planet happened in 2011. The planet has been named Kepler-16b and it is gas giant located around 200 light-years away from Earth.

Until now, all the circumbinary planets that were discovered were found to be gas giants, and astronomers became skeptical that they would ever find a rocky planet which orbits two stars, similar to Tatooine, where Luke Skywalker lived at the start of the series.

According to Jay Farihi, the lead author of the study, and an astrophysicist at the University College London, circumbinary rocky planets seem to be incredibly rare due to the fact that the gravity of two stars would impede the various parts of dust and rock to stick together and form a planet, as they push and pull from different directions.

The scientists discovered the first circumbinary rocky planet in a star system known as SDSS 1557, which is located around 1,000 light-years away from Earth. It was first thought to only include a white dwarf, but a closer analysis revealed the existence of another star, a brown dwarf equal in mass to around 65 Jupiters.