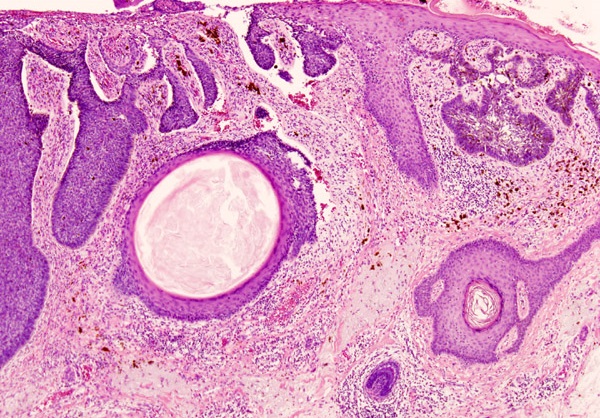 Skin cancer may be kept at bay by a bacteria that resides on the surface of our skin, a study found

Researchers from the University of California, San Diego, have found a strain of bacteria that lives on our skin which may protect us from skin cancer. The discovery could one day lead to treatments that manage or even prevent skin cancer.

According to the researchers, this strain of bacteria is able to keep skin cancer at bay by suppressing the spread of tumor cells triggered by over-exposure to the sun’s ultraviolet (UV) rays.

The bacteria contain a chemical compound that halts DNA formation. This process was observed in mice which were injected with a strain of Staphylococcus epidermidis, the strain of bacteria responsible for making the compound.

“Everyone has some strains of this bacterial species,” said Dr. Richard Gallo, the study’s co-author. “About 20 percent seem to have this particular strain.”

Staphylococcus epidermidis are the most numerous of the many bacteria that normally live on human skin.

While the findings were unusual and noteworthy, the team was not actively looking for a treatment for skin cancer but rather searching for evidence that S. epidermidis could kill off pathogenic bacteria.

Researchers originally focused on the inner working of “good” bacteria and how they can prevent bad bacteria from spreading. The compound which was the most efficient against bad bacteria was 6-N-hydroxyaminopurine (6-HAP).

Researchers knew that cancer cells have runaway growth so they wanted to see if the 6-HAP compound could inhibit those cells. The compound was able to stop DNA formation in different tumor cells grown in the lab. However, they noticed that the 6-HAP was not able to prevent the spread of cancer cells in normal skin cells, as certain enzyme found in human skin deactivated the compound.

Thus, Gallo and his team injected mice with skin cancer cells, after which the rodents received either a shot of 6-HAP or a placebo. Tumors grew in both groups, however, the mice that received the compound had tumors about half the size of those in mice without the compound.

The study was published in the journal, Science Advances.