The Asus EeeBook X205TA comes with Windows 8.1, which means that it will allow you to run all the applications that you’re familiar with and while the X205TA is by no means powerful, it does get the job done for its cost. Here is our Asus EeeBook X205TA review.

Let’s take a quick look at the specifications of the Asus EeeBook X205TA first. 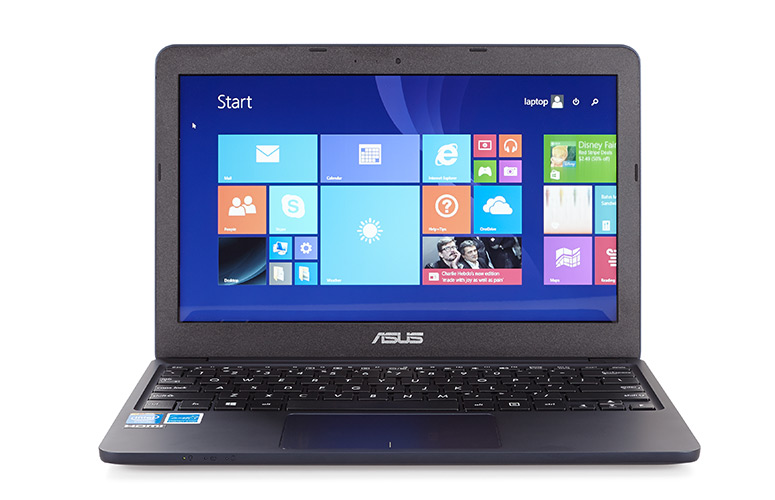 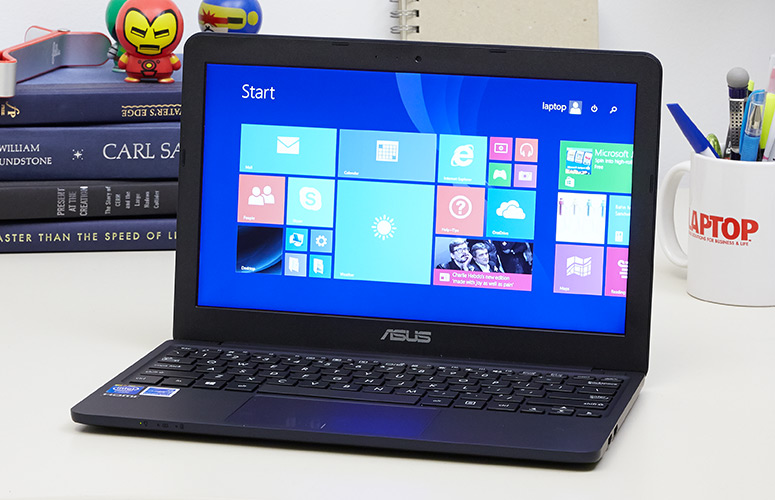 The Asus EeeBook X205TA is primarily designed for everyday use. The laptop will handle pretty well your web browsing between numerous tabs, listening to music and watching videos and editing documents. The laptop comes with a trial version of Office, which means that it will handle Microsoft Office just fine. The release version of the laptop will come with a 12 month subscription of Office 365 Personal and if you choose so, Adobe Photoshop. However, make sure you don’t ask too much of this machine when using Photoshop. It will get the job done but it will hiccup here and there, especially if you’re working with very complex images.

This is mostly due to the fact that the Asus EeeBook X205TA is built with high-efficiency low-power hardware. The laptop comes with an Intel Z3745D CPU, 2GB RAM and 32GB of storage. However, because the eMMC and the RAM are both soldered to the motherboard, this will become really annoying, really fast.

You will be left with very little storage space after the installation of the operating system (around 14GB), which means that Asus had to cut corners in order to make this laptop as affordable as it is. This will leave you with two options: you will either have to use the cloud space offered by Asus for free in the WebStorage environment or expand the storage of the machine by using a microSD card.

To be perfectly honest, I was very disappointed that the Asus EeeBook X205TA doesn’t support standard SD cards. This would have been very useful for transferring photos from cameras while on the run. However, this probably isn’t such a big deal for most people. All in all, the Asus EeeBook X205TA is a pretty capable notebook and it will be able to handle most things.

It comes with pretty punchy and loud speakers that are located on the belly of the laptop. The experience is even greater due to the fact that the machine doesn’t have any movable parts in it or any fans to make noises.

The Wi-Fi chip on the laptop is pretty good as well. While it won’t match your Internet speed if you have a great connection, it won’t lose its signal either when you move away from the router. We were able to stream 1080p YouTube videos on it without having to wait for the buffer or having to download the media file without any hiccups. So in my opinion, this is amazing for a computer that sells for only $199.

That being said, gaining access to all the internal things in the laptop won’t be of much help to you because everything is soldered on to the motherboard. As a matter of fact, the motherboard is pretty small as it is, most of the space inside the laptop being used for the battery. The good thing is that the battery is also held in place by some screws and, if needed, it can be easily replaced.

It would have been great to be able to update its storage but there is no dedicated storage stick inside the machine. This means that you won’t be able to upgrade that 32GB of internal storage. This is pretty annoying, seeing how most of that space will be occupied just by Windows. To be fair, you can use Linux on the laptop and Mint or Ubuntu will probably work just fine on the laptop, but if you’re not such a huge fan of that particular operating system, you will be stuck with Windows.

The case of the Asus EeeBook X205TA remains pretty cool under everyday use and won’t get very hot when putting the laptop through a lot of stress either. The internals reach around 80 degrees Celsius under a lot of stress and both the GPU and CPU will run under the default frequencies. However, you should keep in mind that the Asus EeeBook X205TA is designed for everyday activities and not demanding multitasking and other chores. 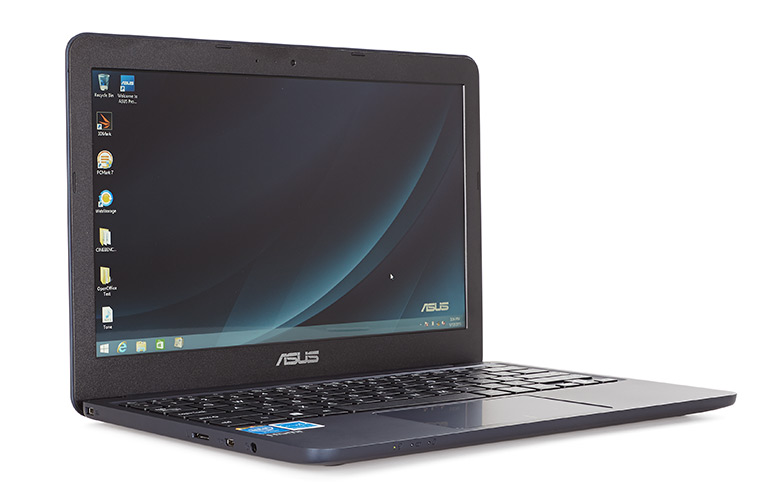 The typing experience isn’t all that bad on the Asus EeeBook X205TA because the keyboard is pretty good and the position is comfortable. The laptop has a very generous palm rest which will allow you to type easily on it.

The keys on the Asus EeeBook X205TA are pretty firm and have a decent feedback and travel, considering the size of it but they do feel somewhat cheap. The layout is also cramped vertically because Asus chose to use rectangular keys on the device and not square ones. The arrow keys are also very small, but this is to be expected as we’ve seen this issue in other Asus laptop reviews.

But because the keys are smaller, this will leave a lot of space for the palm rest and the trackpad. While I did face some issues with the trackpad in everyday use, most of the times it worked just fine. However, sometimes it does double click by itself and will occasionally send your cursor flying on the screen but this generally happens when you put the laptop under a lot of stress.

That being said, this is one of the issues that definitely need tweaking on the Asus EeeBook X205TA. But seeing how the erratic cursor is most of the times a software issue, it could be resolved by future updates. 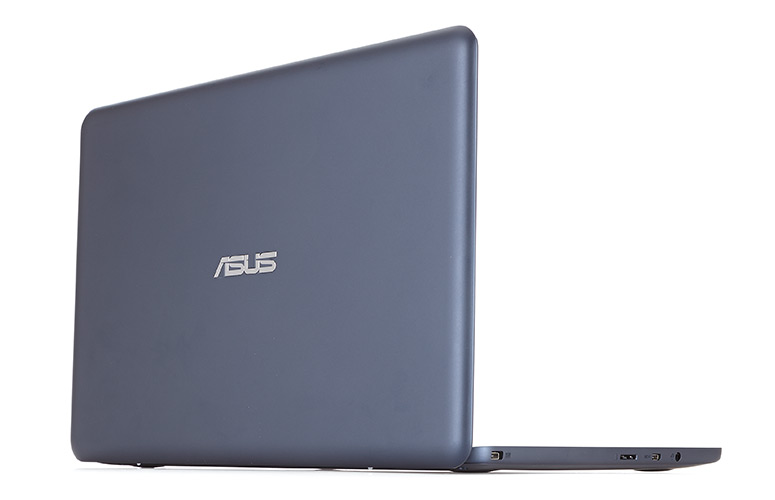 The Asus EeeBook X205TA weighs just less than 1kg and also has a compact footprint along being very thin. It will easily fit in a bag or a backpack and the laptop is also pretty tough and has a nice design. If you grab the machine and give it a little squeeze it will make some creaks, which are usually associated with cheap plastic laptops, but considering how little money this computer costs I have to say that it’s pretty well built and has a really nice finish to it.

The case is made out of soft matte plastic that is present on the interior, the lid and the belly of the laptop. While the bezel around the screen is the only thing that remains black on this laptop, Asus offers the device in various other colors. The materials used to build the laptop feel very pleasant to the touch and there aren’t many things you could complain about the quality of the finish either.

But to be fair, there are two things that can annoy you regarding the laptop. The case catches finger oil and smudges pretty easily and will be very visible if you purchase the dark blue model of the laptop and the lid flexes a bit. While this doesn’t really affect the integrity of the screen, if you do press a little harder on the lid you will see some ripples on its screen. This means that you should consider purchasing a sleeve for it and you should be very careful when carrying it in a backpack.

The laptop comes with an 11.6 inch non touchscreen display with a resolution of 1,366×768, a glossy finish and a TN panel. This means that it has pretty poor vertical viewing angles and the colors will quickly fade when viewing it from awkward angles, but this is to be expected with such low priced screens. That being said, if you look at the laptop heads-on, you shouldn’t be very bothered by this aspect.

The screen leans to around 140 degrees to the back, which is pretty good, but not perfect. The laptop is lifted on two plastic feet which will leave more space under the laptop for cooling and will raise the keyboard for a better position for typing.

The display is pretty decent despite the following measurements:

The screen does have some problems displaying very accurate blacks when used at a high brightness and the colors might sound a little awful but the fact is that the display isn’t as bad as the numbers above would suggest. Asus could have chosen to equip the laptop with a matte screen, since the display is not touchscreen but they chose to make it glossy which will prove to be problematic when using the laptop in bright sunlight.

The laptop comes with a 38Wh battery which will give you around 10 hours of battery life in everyday use. This includes editing documents, browsing the web, listening to music and watching YouTube videos with Wi-Fi turned on. The laptop was also capable of lasting for around 9 hours on 60% brightness when looping a 720p mkv file in WMP-HC. The laptop ran for 8 hours when looping a 1080p video on YouTube.

The laptop will last for weeks in stand-by and the Always Connected feature from Intel will make sure that all your emails and updates will be ready for you when you wake the machine up. The Asus EeeBook X205TA comes with a compact 10Wh power brick and a pretty long cable. You will be able to charge the battery from 5% to 99% in around 2 hours and 15 minutes. 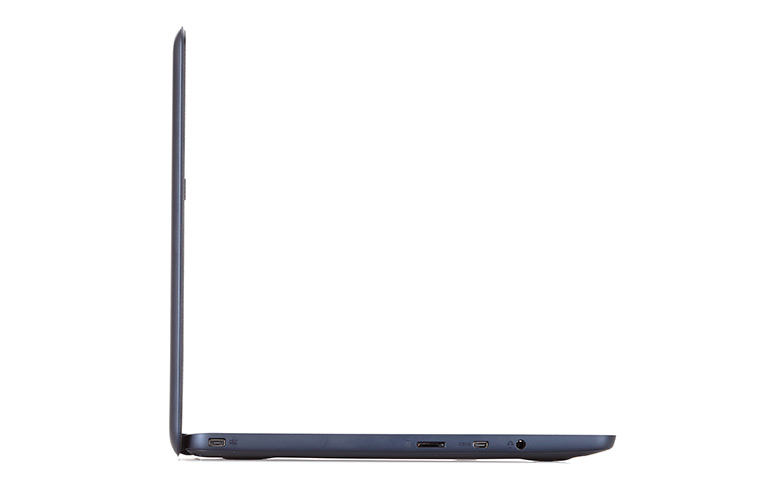 All in all, Asus did a pretty good job with the Asus EeeBook X205TA. After using the computer for some time, there was only one thing that annoyed me the most: its trackpad. Also, the microSD and micro-HDMI slots can prove to be problematic along with the fingerprint magnet case, but these are in no way huge problems. The storage space should be neatly organized and probably left only for Windows.

However, this is pretty much it. You can’t really complain about a $200 laptop that performs and looks as good as this one does. Because it’s so sturdy and light and also because it lasts so long on a single charge, the Asus EeeBook X205TA can be a really nice travel companion. It can also be a great laptop for kids, because it’s so cheap and you won’t mind if they break it. The Asus EeeBook X205TA can also be a good pick for someone who is looking for an inexpensive and small computer that can handle Windows 8.1 and all the software that is compatible with the operating system.

That being said, you should keep in mind that the Atom CPU inside the machine won’t be able to handle very demanding tasks and hardcore gaming. But if you plan to only use the laptop for daily activities, you really can’t go wrong with this $199 machine.

It has a decent keyboard.

It is able to handle multimedia activities and most daily tasks.

It lasts for a very long time on a single charge.

It comes with miniaturized ports.

The touchpad is pretty erratic.

It has limited internal storage.

So there you have it. This was our Asus EeeBook X205TA review. Make sure you check our other Asus laptop reviews if you plan on buying an Asus computer.