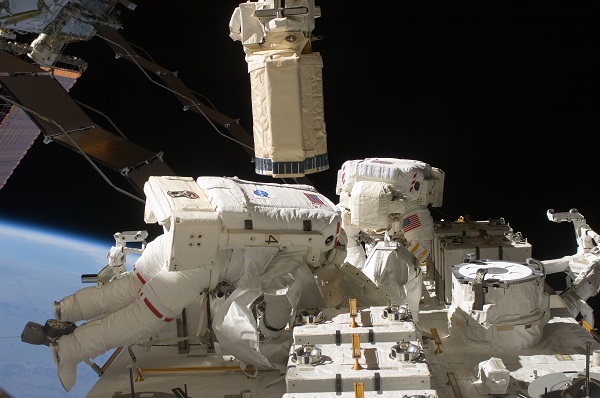 A new navigational system will help astronauts orient themselves in space.

When astronauts get lost in space, they don’t get to orientate themselves in the same way a drunk person would down a street. They’d float and float until the last trace of oxygen runs out, and then a simple spacewalk turns into a deathtrap. However,  a new type of technology is set to eliminate the threat of getting lost in the cold vacuum.

Engineering firm, Draper, has come up with a new type of spacesuit which is equipped with autonomous thrusters, however, the technological setpiece comes in the form of the „Take Me Home” button. The suit is designed to automatically guide astronauts back to their home base during an emergency in space. NASA is partially funding the project, while Draper is set to develop it.

Currently, NASA astronauts on board the ISS station have a lot of fail-safes during spacewalks. One of them is that they always have to stay connected to the space station when they’re outside in space suits. However, if they do get detached, they would use their SAFER jet backpacks. These backpacks are equipped with small thrusters that are capable of propelling an astronaut in the desired direction. One thing that sets Draper’s technology apart from NASA’s current equipment is its user-friendliness. The SAFER backpack is manually operated by the astronaut and he or she would have to undergo lots of hours of training in virtual reality to become proficient.

„You see how difficult it is to complete those operations and how much time it takes to become proficient at it,” said Kevin Duda, a space systems engineer at Draper.

This prompted Draper to automatize an astronaut’s orientation system and make the SAFER backpack obsolete.

According to Duda, the „Take Me Home” button uses a high-resolution camera to form points of reference around the astronaut as well as a unit to measure how a person is moving through space. The engineer said the system would also need a guidance system to point the astronaut in the right direction. Draper has been working on an algorithm to solve just that.

The exact mechanics have yet to be explained, as Draper just recently filed a patent for the „Take Me Home” button. As of now, the firm demonstrated how the technology might work in simulations.