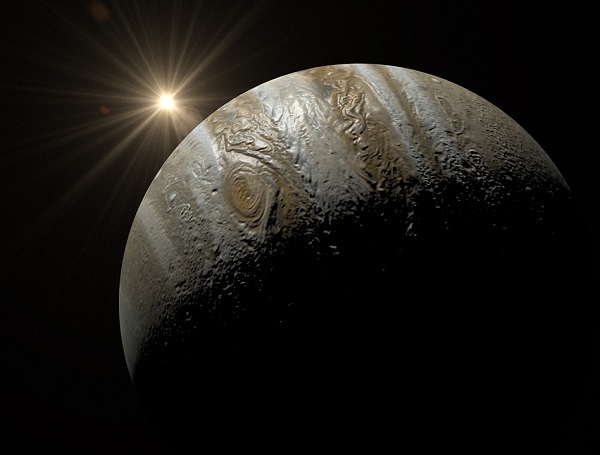 Recent observations reveal the fact that Jupiter can boast with its Great Cold Spot, not just the “Red” one.

Recent observations reveal the fact that Jupiter can boast with two “great spots”, not just one as initially believed. The Great Cold Spot, as it is being called, is a cooler area in the planet’s otherwise scorching atmosphere. Jupiter’s newest feature was discovered near its auroras and is the reason behind this dark and cold zone.

For a long time, Jupiter has been known for hosting the “Great Red Spot”. Now, the most recent observations determined the existence of another such formation. The Great Cold Spot is situated high up in the atmosphere and expands over an area 24,000 km by 12,000 km. Although similar in size, the “spots” have very different properties.

The “Cold Spot” is about 200 degrees Celsius colder than it’s the atmosphere surrounding it. At the same time, it is still very hot with temperatures reaching in between 426 to 726 degrees Celsius. Also, according to research, the feature may have been created by the planet’s powerful polar auroras.

Jupiter’s magnetic field can interact with its atmosphere, which can drive currents of heat around the gas giant planet. However, this can also create a vortex of cooler gasses in the atmosphere’s outermost layers.

“This is the first time any weather feature in Jupiter’s upper atmosphere has been observed away from the planet’s bright aurorae.”

This was stated by Tom Stallard, a University of Leicester, UK researcher and the study’s lead author. The “cold” spot was spotted using the Cryogenic High-resolution Infrared Ehelle Spectrograph or CRIRES, an instrument of the ESO’s Very Large Telescope. Its data was also combined with information gathered by the NASA InfraRed Telescope Facility.

When combined, this resulted in 13,000 images which offered a variety of data. For example, for how long the spot has been there or its registered changes. As such, they revealed the area’s highly frequent changes, and also suggests that it “continually reform itself”. Research results on the matter were published in the Geophysical Research Letters journal.