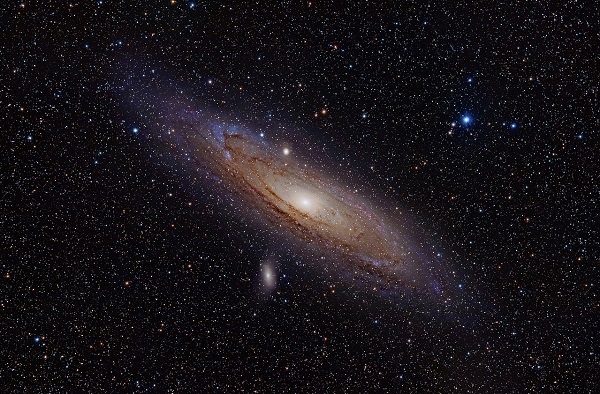 One of the oldest galaxies to date has been discovered by a team of scientists courtesy of the Large Millimeter Telescope LMT). The galaxy is thought to have formed 12.8 billion years ago within and billion years after the Big Bang.

The discovery was made by an international team of researchers from the University of Massachusets Amherst and Mexico’s National Institute of Astrophysics, Optics, and Electronics. Designated G0 83808, the galaxy is so far away that in only showed as a blur on the Herschel space telescope. Only after scientists pointed the Large Millimeter Telescope could they focus on the find. The Telescope is located on the summit of Volcan Sierra Negra in the Galapagos and is the largest steerable dish in the world.

Distant objects are difficult to make out even with today’s state of the art Hubble telescope due to gigantic dust clouds. Telescopes like Hubble are effective when using visible and infrared wavelengths that unfortunately can’t see through the dust. The LMT, on the other hand, uses millimeter-length wavelengths capable of peering through.

This sets G09 83808 as the second oldest galaxy discovered so far with the findings being published in the journal Nature Astronomy. It holds great potential in finding out more about the Big Bang which scientists predict to have happened 13.7 billion years ago.

Astrophysicist at the University of Massachusets Amherst, Min Yu, considers G09 83808 to be one of the first galaxies ever to form after the Big Bang.

„Seeing an object within the first billion years is remarkable because the universe…was too hot and too uniform to form anything for the first 400 million years” he states.

The good news is the LMT telescope is getting upgraded and will be capable of looking even further into the universe as old galaxies tend to drift further to the edges of the universe.