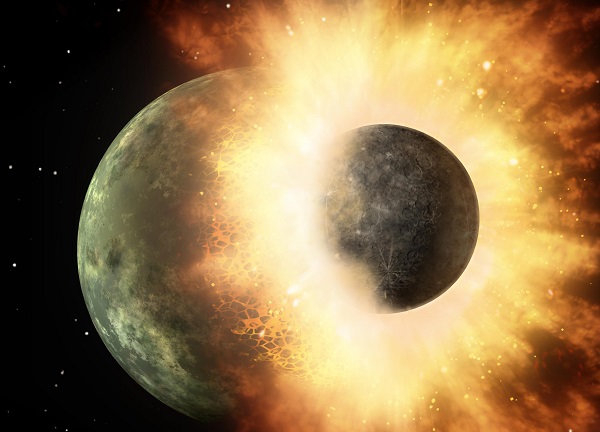 Moon-sized Planetesimals are said to have collided with Earth in the past.

We still don’t know much about Earth’s evolution, especially how so many metals came to be on the blue rock. Researchers at the Southwest Research Institute, and the University of Maryland partnered up with the space agency, NASA, to answer this very question. It has to do with the moon.

According to the scientists, a large moon-sized planetary bodied smashed into Earth and then penetrated all the way to its core right after the moon’s formation approximately 3.8 billion years ago. When it occurred, large quantities of metals that chemically bond to metal were planted in the Earth’s mantle. These metals include gold, platinum, and iridium.

The team of researchers created high-resolution impact simulations to show how large celestial bodies could affect the Earth if they were to reach its core. They also focused on how these massive rocks would react if they’d ricochet off Earth’s surface, changing the physical make-up of the planet.

In the beginning, there were several celestial bodies in the Solar System called planetesimals.  Their size did not allow them to become planets so instead, they ended up floating in space. Planetesimals are said to have been the size of the Moon, but not big enough to be labeled as planets. According to NASA, some of these collisions were crucial to the formation of the mantle and crust of planets.

The Earth was hit by numerous planetesimals in the beginning, some of which were the size of the moon. These collisions make up for 0.5 percent of matter to the Earth’s total mass, and a lot of these fragments were carried all the way into the Earth’s core, according to the report.

“We modeled the massive collision and how metals and silicates were integrated into Earth during this ‘ late accretion state,’ which lasted for hundreds of millions of years,” states Simone Marchi, a scientist at Southwest Research Institute in Colorado and head author of the paper.

The late accretion describes the period where Earth experienced numerous collision with planetesimals.